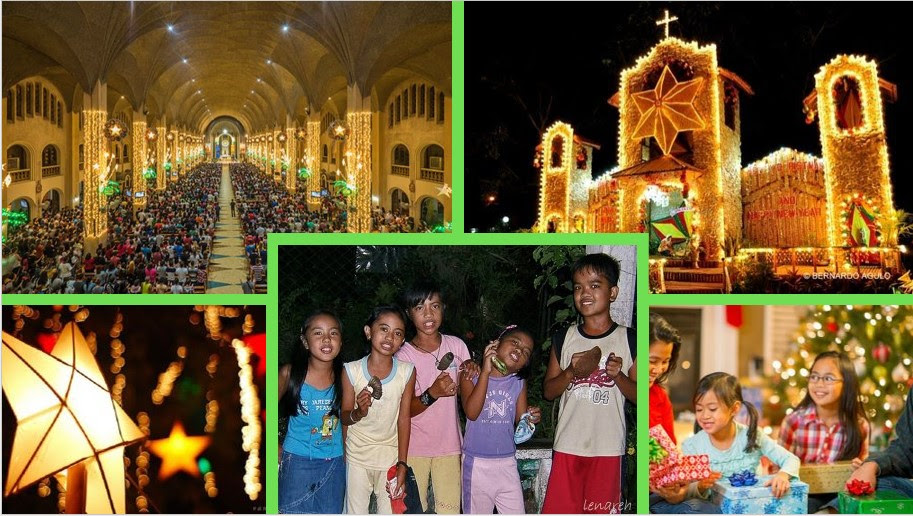 MERRY CHRISTMAS! TOO SOON? Not when you’re in the Philippines!

Filipinos takes the phrase “Christmas season” to a different level, the 1st of September marks the start of the Yuletide season or best known as the BER-months (SeptemBER to DecemBER), when decorations are put up and Christmas carols are played in shopping malls, radios and it jingles all the way up until the Feast of the Three Kings in January.

There’s no textbook explanation for why we celebrate Christmas so early, there are hundreds of theories, but we’ll leave that topic for another time. The long festival days are associated with many unique Filipino traditions, here are some:
Approximately 80% of Filipinos are Catholics, and celebrating Christmas definitely involves religious activities. Influenced by the Spaniards there’s the “Simbang Gabi” (Dawn Mass) or popular by its Spanish name “Misa de Gallo”. It’s a series of nine dawn masses on the days leading up to Christmas. It starts on December 16th until Christmas Eve. As we continue this tradition, many Filipinos credit Simbang Gabi with the belief that when they complete the entire series of nine dawn masses, it is said that their wishes will be granted.

Parol or Filipino Christmas Lantern – It is a star-shaped lantern which is the iconic symbol of Christmas in the Philippines. It is typically being hanged outside Filipino houses.

Most of the children go from house to house singing Christmas carols for the residents. This is known as the “Caroling” as it is known in the US and other countries. BUT- these carolers have homemade instruments made from cola bottle tops or biscuit tins. Speaking of creativity, right?

Noche Buena- In Spanish-speaking countries as well as the Philippines, Noche Buena refers to Christmas Eve and the feast before Christmas. It’s the highlight of the Christmas celebration, the food prepared and severed are diverse. While holiday meals are ubiquitous, Filipino Noche Buenas are typically shared with family and neighbors.

Christmas Parties Galore- who says eating stops after Noche Buena? Filipinos love to have a good time with their friends and loved ones, and Christmas is one of the best excuses to throw parties, unli food? drinks? karaoke anyone? Don’t bother with the futile attempt to stick to your diet – it’s not happening, trust me!

Christmas in the Philippines is all about families. It’s a time for reunions – meeting relatives and friends you may not have seen in a long time. Almost all Filipinos, especially those working or living abroad, return home during Christmas, braving the crowded airports as families and friends gather to celebrate. Filipinos’ strong sense of family and the preservation of bonds make Christmas the perfect time to share love and blessings.

It’s almost always a Merry Christmas in the Philippines. Circumstances may be challenging at times, families may not always be complete, some may even have to work on Christmas eve, but certainly, Filipinos know how to see the light in Christmas. This is why even Filipinos abroad would agree when I say “Iba talaga ang pasko sa Pinas!” or Christmas is indeed different in the Philippines.

I guess the next question would be, why do Filipinos start celebrating the Holidays in September? Filipino are very family-oriented, if you end up in the presence of Filipinos for an extended period of time, you can expect the visitor hospitality to turn into genuine familial love, having said that, once an honorary member of a Filipino family, you can also expect to be invited to all of their fun and food filled gatherings. The holiday season’s long celebration boils down to the people’s love of family and friends, love of celebrations and the core Filipino trait of optimism, humor, positivity and “pakikisama” (getting along with each other).

Previous Post
In the Spotlight: September 2022
Next Post
From row homes to country barns: How this city girl came to own racehorses